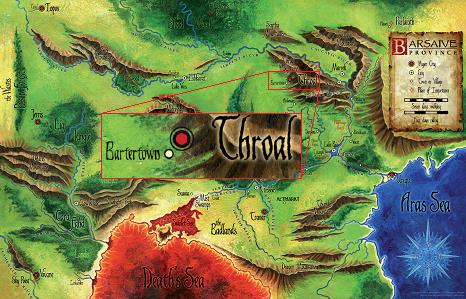 Arguably the most powerful nation in Barsaive, Throal is a dwarven nation located in the Throal Mountains. The kingdom consists of two main parts. The oldest section, the Halls of Throal, was built before the scourge and converted into a kaer. Since the Scourge ended, the Inner Cities of Bethabel, Oshane, Tirtaga, Wishon, Yistane, Hustane, and Valvia have been constructed deeper within the mountains to accomodate population increases and immigration. Although traditionally a dwarven nation, Throal is now the most cosmopolitan nation in Barsaive with dwarves making up slightly under 50% of the total populations.

Throal is home to the Great Library of Throal – easily the greatest collection of knowledge in Barsaive, and possibly second only to the Eternal Library of Thera. The Great Library is constantly striving to gather more knowledge, and often pays for the adventure journals of exploring heros and sponsors research expeditions.

Before the Scourge, Throal served Thera by helping to administrate Barsaive. While Thera provided the plans and knowledge to build kaers and citadels and survive the centuries of hiding (the Rites of Protection and Passage), Throal gave thought to the future and the the world that their descendants would be emerging into. Throal prepared the Book of Tomorrow – a collection of tales, legends and essays meant to keep the flame of hope alive for the generations born in the dark, and prepare them for the day they return to the outside world. Copies of the Book were distributed to kaers and citadels accross Barsaive. So many generations were educated from the Book that now Dwarfish is the common spoken language of Barsaive and the only written language that many Barsavians of other races know.

During the centuries of the Scourge, Throal busied itself trying to make a fair, consistent, uniform code of law and government, based on the concepts of personal liberty and social responsibility. The final document, called the Council Compact, is best known for developing the philosophy that slavery is wrong and a crime against the individual. When a copy of the Compact reached the hands of the First Governor of Thera on their return to Barsaive, Thera responded by attacking in force. As an underground nation, Throal was difficult ot bombard from the air, but was under blockade from the Teran Navy for years.