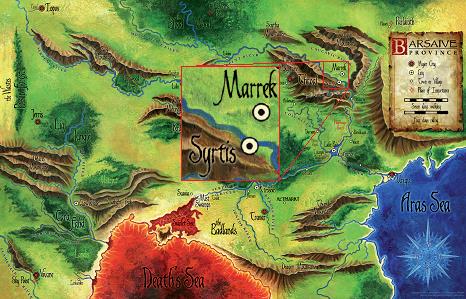 The Cliff City of House Syrtis is built into the southern wall of Lalai Gorge, a few miles south of where the Serpent and Caucavic Rivers meet, and about 1500 feet north of Dragon’s Gullet, the narrowest (1/2 mile) and fastest part of the Serpent River.

House Syrtis itself is the oldest of the T’skrang Aropagoi. It is the second oldest community in Barsaive, after the Elven Court. Although the Cliff City could hold up to 60,000 residents, it currently houses only around 6,000, due to a post-Scourge diaspora to many T’skrang river villages. The Syrtis Aropagoi’s riverboats dominate the Mid-Reach of the Serpent River.

Syrtis Serves as the end of the ancient T’skrang Pilgramage route. Any pilgrim who completes the pilgrimage is traditionally granted an audience with the Shivalahala Syrtis (also known as the Prophetess) where the pilgrim may ask a question of her.