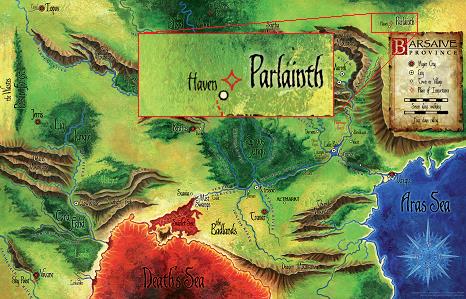 Parlainth was the very impressive Theran provincial capital of Barsaive before the Scourge. The city used an unusual strategy to protect itself. Instead of building a Kaer or Citadel, the city sealed itself into a hidden pocket of astral space and cast a immensely powerful spell to make the rest of the universe forget it existed. They purposely left behind some hidden magical artifacts that would bring the city back when it was safe.

Parlainth was rediscovered by a questing band of heros (?) (well they were members of the Theif Discipline) using one of those magical artifacts during the Theran War. Instead of glorious Parlainth, they found a Horror infested ruin. More adventuring types arrived after the war to seek glory, power and riches amid the ruins. A small group of them managed to secure a relatively safe corner of the city to use as a base of operations, now called the town of Haven.

The rediscovery of Parlainth was the direct cause of the opening of New Marrek. The sudden recovery of knowledge about a major nearby Theran provincial capital was a shock to the system of the record keepers. Obviously something was going on out in Barsaive and it was time to poke the city’s collective head out and look around. New Marrek sent out its first explorers during the height of the Theran War, while the Theran Navy was blockading Throal and raiding settlements across Barsaive. This is why New Marrek decided to stay hidden until Thera’s power in Barsaive is broken.