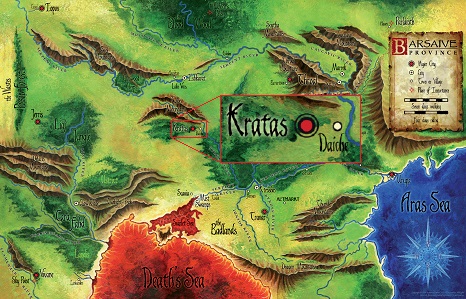 A wretched hive of scum and villiany…

Before the Scourge Kratas was a sizable trading city-state and reasonably wealthy. They built their city into a citadel and proceeded to wait out the Scourge like everyone else. Their defenses failed.

When explorers reached the city after the Scourge it was an empty ruin. Adventurers, bandits, and other ne’er-do-wells moved in to start looting the ruins. Over time, some of the bandit gangs based in Kratas began to raid nearby settlements and caravans as well.

Kratas is now known as the “City of Thieves.” It’s a relatively lawless town with a much smaller population than the city could support, controlled by competing gangs. The two largest gangs are Named the Force of the Eye, and Boucher’s Brood. The technical leader of the town is Garthik One-Eye, a very old and legendary Ork Thief.

In addition to treasure hunters and bandits, there are also merchants and tradesmen who accept the risk of dealing with the gangs due to desperation or greed. Kratas has possibly the largest black market in Barsaive, dealing in exotica, information, and items which are stolen or contraband elsewhere. Visit at your own risk.